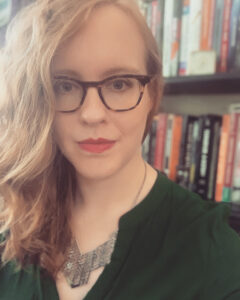 I am an assistant professor in the School of Politics & International Relations at the University of Nottingham. I study what it means to “know terrorism when we see it”—and who gets to decide. I do this by talking to national security bureaucrats and policymakers in Germany and the U.S. and seeking to understand how the people who make counterterrorism policy understand what terrorism is, where it comes from, and what makes it different from other forms of violence.

My current book project, The Idea of Terror: White Supremacist Violence and the Making of Counterterrorism, uses interviews and fieldwork in Germany and the United States to investigate the persistent lack of policy responses to white supremacist violence. I argue and empirically demonstrate that institutional white supremacy constrains the imaginations of even the most anti-racist national security policymakers, and in doing so constitutes counterterrorism as a tool of governance, not national security. I also work on far-right extremism, international security law, and critical theory. My work has been published or is forthcoming in International Studies Quarterly, Critical Studies on Terrorism, Security Studies, Lawfare, The Washington Post, and Political Violence at a Glance.

I am a devoted educator, an Associate Fellow with the Higher Education Academy, and an active member of the University of Nottingham’s branch of the University and College Union. As a queer academic with mental illness, I am passionate about creating classrooms welcoming to and inclusive of all learners and have written on this topic for the Higher Education Policy Institute. I piloted UW–Madison political science’s first diversity recruitment initiative, served on both departmental and professional committees advocating for graduate students, and was part of a team that studied the history of Black faculty hires in UW–Madison political science. Currently I serve on ISA–Northeast’s governing council.

I tweet frequently about terrorism, academia, and social justice at @AnnaMeierPS.